Gender and Social Exclusion in Nepal 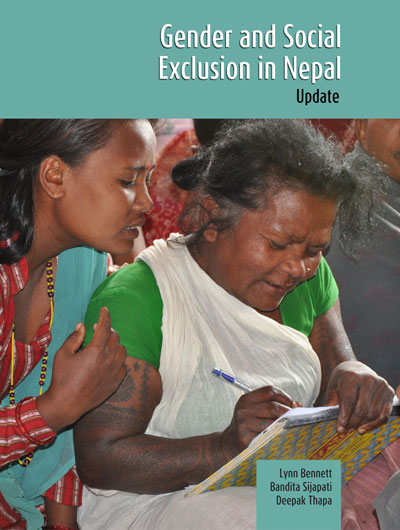 Gender and Social Exclusion in Nepal

Lynn Bennett’s first exposure to gender and social issues in South Asia was as a Fulbright Lecturer at Sri Padmavati College for Women in Tirupati, India. She later obtained her PhD from Columbia University in 1978, and her dissertation was published as Dangerous Wives and Sacred Sisters: A Study of High Caste Women in Nepal (Columbia, 1982). She led a major three-year research project on the social and economic status of women in Nepal at the Centre for Economic Development and Administration (CEDA), Tribhuvan University, for USAID, which resulted in the 13-volume series The Status of Women in Nepal in 1981. She joined the World Bank in 1988 where her first job was to prepare the report Gender and Poverty in India. She then served as Gender Coordinator for the Asia Region at the World Bank in Washington DC and between 1997 and 2001 she served as Director for Social Development in the South Asia Region. She led the joint DFID/World Bank Gender and Social Exclusion Assessment (GSEA), the summary report of which was published in 2006 as Unequal Citizens: Gender, Caste and Ethnic Exclusion in Nepal.

Bandita Sijapati has worked with the United Nations Mission in Nepal, UNDP’s South Asia Poverty Alleviation Programme and the World Bank. She has a Master’s degree from Columbia University and a PhD from Syracuse University, New York. Her publications include Governing Labour Migration in Nepal (co-author) (Himal Books, 2012) and A Kingdom under Siege: Nepal’s Maoist Insurgency, 1996-2004 (co-author) (Zed Books, 2004). Her research interests include migration, transnationalism, citizenship, identity, political psychology and civil conflicts.

Deepak Thapa is the Director of Social Science Baha, Kathmandu. His latest publication includes ‘Nepal: Case Study’ for the World Development Report 2011. He is the editor of Understanding the Maoist Movement of Nepal (Martin Chautari, 2003) and co-author of A Kingdom under Siege: Nepal’s Maoist Insurgency, 1996-2004 (Zed Books, 2004). In 2006, he was a Visiting Fellow at Columbia University as The Asia Foundation’s inaugural William P. Fuller Fellow in Conflict Resolution.