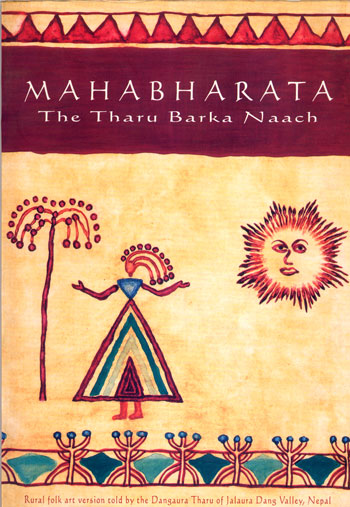 MaobadiEthnicity, Inequality and Politics in Nepal

In 1993 Kurt Meyer and Pamela Deuel, on a routine research trip in Nepal’s Tarai, learned that farmers in one Tharu village had once performed a folk version of the Mahabharata, known in Tharu as the Barka Naach, the “big dance.” Meyer and Deuel learned that although the tradition had died out, a few older villagers still recalled the songs and dances of this important religious festival. When they were told that a collection of songs and song fragments existed in writing, they decided to help revive the tradition and to publish the collection of songs. In autumn 1998, the villagers of Dang Valley performed the Barka Naach for the first time since the early 1960’s. Tradition holds that, to be ritually correct, the complete. It is hoped that the 1998 festival will lead to the continuing revival of the Barka Naach among the Dangaura Tharu in future years.

Few outsiders have seen this other Nepal or the folk traditions of the Tharu, whose unique artistic tradition of the Barka Naach is published here for the first time. As Mahatawa Chandra Prasad Chaudhary told Meyer and Deuel, “We are afraid of losing our Tharu culture, which is deteriorating day by day. The main purpose of reviving the dance is to maintain Tharu culture so it can continue to survive. For this purpose my father, with the help of Naraharinath Yogi and Badrinath Yogi, wrote a book describing the role of the Barka songs in Tharu culture.”

Born in Zurich, Switzerland, Meyer received his architectural degree from the Swiss Federal Institute of Technology (ETH) and practiced architecture in Los Angeles for 40 years. He has been a Himalayan explorer for twenty years and a collector of rare books on Central Asia and the Himalayan countries. In 1992 he sold his architectural practice and devotes full time to researching the architectural design and artistic traditions of the Tharu of Nepal.

Pamela Deuel has lived in Nepal since 1993, researching, living with and recording the customs of the Tharu. Born in California, she graduated from. Stanford University in journalism and has an MA in Multicultural Education. She worked for a decade in the environmental movement in the United States. For 4 years Meyer and Deuel traveled to remote corners of Nepal’s Tarai lowlands in search of the folk art, architecture and traditions of the Tharu, knowing that the changes of modern society would quickly reach even remote settlements. The first people to document the diversity of Nepal’s Tharu material culture, they were welcomed in hundreds of Tharu homes from Nepal’s eastern border to its western edge. An acclaimed exhibition of their work was held at the Indigo Gallery in IKathmandu in 1997. Research scholars affiliated with the Center for Nepali and Asian Studies of Nepal’s Tribhuvan Univerisity, Meyer and Deuel are working on two other books about the Tharu. The second book, also published in 1998, is The Kings of Nepal and the Tharu, a rare collection of previously unpublished royal grant documents bestowed on Tharus from the founding of the nation of Nepal up to modern times. The third book is an overview of Tharu art and architecture with full color photography.

Be the first to review “Mahabharata: The Tharu Barka Naach” Cancel reply