Regionalism and National Unity in Nepal 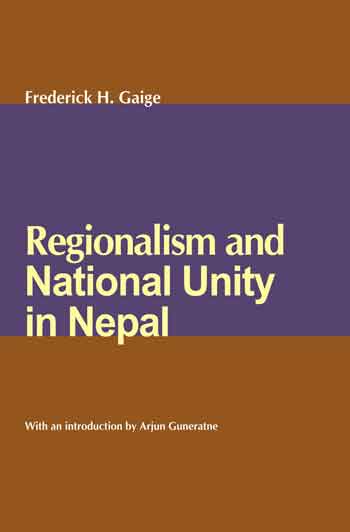 Regionalism and National Unity in Nepal

Thirty-four years after it was first published,
Frederick Gaige’s Regionalism and National Unity in Nepal remains the
single best introduction to the socio-political context of Tarai politics.

—From the Introduction by Arjun Guneratne,
author of Many Tongues,

One People: The Making of Tharu Identity in Nepal

Regionalism and National Unity in Nepal is Frederick H. Gaige’s acclaimed study of
the Tarai and the Nepali state’s misdirected and ineffectual attempts at
integrating the region into the national mainstream. The theme of the book
remains as relevant three decades later, especially at a time when the very
essence of Nepali nationalism is being questioned and new forms of co-existence
are being negotiated. The introduction by Arjun Guneratne updates the reader on
the social and political context in which the book is being re-issued besides
highlighting some of the more pertinent issues now at stake in the Tarai,
indications of which are scattered throughout Gaige’s book.

Frederick H. Gaige began his
teaching career at Davidson College, North Carolina, where he established a South
Asia programme and played a major role in establishing a
consortium of colleges and universities called the Southern Atlantic States
Consortium for Asian and African Studies. He then moved on to more general
university administration, first as Vice-President for Professional Development
at the Kansas City Region Council for Higher Education, then as Dean of the College of Arts and Sciences on the Madison Campus of Farleigh
Dickinson University in New Jersey, and, finally, for nearly seventeen years,
as Dean and Campus Executive Officer (or Chancellor) of the Berks Campus of
Penn State University in Reading, Pennsylvania. He retired in 2001.

Arjun Guneratne teaches
anthropology at Macalester College, Saint
Paul, Minnesota. He
has been researching in Nepal
since 1989 and has published a number of articles and two books, Many
Tongues, One People: The Making of Tharu Identity in Nepal (Cornell University
Press, 2002) and Culture and the Environment in the Himalaya (Routledge,
2009).  He is also the editor of Himalaya,
the journal of the Association for Nepal and Himalayan Studies (ANHS).