The Caste Hierarchy and the State in Nepal: A Study of the Muluki Ain of 1854 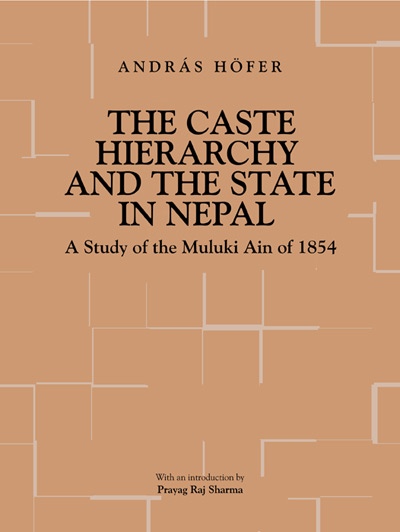 The Caste Hierarchy and the State in Nepal: A Study of the Muluki Ain of 1854

The Muluki Ain of 1854, the subject of András Höfer’s study, is a document of great historical, legal and cultural interest for scholars on Nepal. For nearly a hundred years since it was first promulgated in the mid-19th century, it remained in force as the prime law of the land.It was the epitome of orthodox Hindu values, and given to protecting the pre-1951 political order of Nepal as well as the social and religious values it stood for. Barring a couple of articles in the 1960s and the 70s, which amounted to no more than scratching its surface, no scholar before Höfer had turned his attention to tap the wealth of social and cultural material contained in the Muluki Ain in an exhaustive manner. Höfer’s book is the first-ever attempt by anyone to study the ‘anthropology of caste’ in Nepal, basing on a written legal document and digressing from the usual field-derived ‘village study’ method of an ethnographer. In fact, the prospect of cracking a jumble of a document running to over 700 printed pages, using an old form of Nepali language and unfamiliar administrative and legal terms of a bygone century, was a daunting task to undertake. It is obvious that no one else has studied the Muluki Ain either before or since Höfer at such length and in such depth. This alone is enough to make the present book a landmark research with whose help alone we are able to know the structure of the macro-Nepali society of 19th century vintage, its legacy running down to our own times still very strongly in many respects.
András Höfer is retired Associate Professor of Asian Anthropology at the South Asia Institute of Heidelberg University, Germany. He received his PhD from the University of Vienna, Austria, and was a post-doctoral student at the Ecole Pratique des Hautes Etudes and the Ecole des Langues Vivantes Orientales in Paris. Between 1968 and 1983, he carried out field research chiefly among a Tamang group in Dhading district. His more recent publications include A recitation of the Tamang shaman in Nepal (Bonn, 1994), and Tamang ritual texts II: Ethnographic studies in the oral tradition and folk-religion of an ethnic minority in Nepal (Wiesbaden, 1997). He is Fellow of the Association for Comparative high Alpine Research, Munich, and currently Review Editor of European Bulletin of Himalayan Research. Prayag Raj Sharma is the author of A Preliminary Study of the Art and Architecture of the Karnali Basin (Paris, 1972) and many articles on state and society in Nepal. He received his MA from Allahabad University and his PhD from Deccan College, Pune University. He was associated with the Centre for Nepal and Asian Studies (CNAS), Tribhuvan University, from its very inception. He was the founding dean of its predecessor, the Institute of Nepal and Asian Studies (INAS), from 1972 to 1978, as well as the founding editor of the Contributions to Nepalese Studies. He retired as Professor of Ancient History from CNAS in 2002.

Be the first to review “The Caste Hierarchy and the State in Nepal: A Study of the Muluki Ain of 1854” Cancel reply