Uncertainty: On a Himalayan Scale 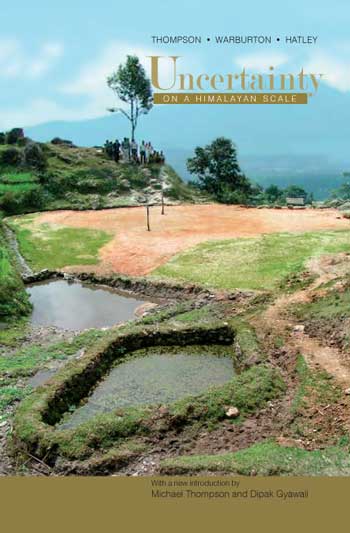 Uncertainty: On a Himalayan Scale

The Himalaya, all the experts agree, face serious environmental problems; they are caught in a downward spiral. The rate of fuelwood consumption, for instance, is asserted to be far in excess of the rate at which the forest grows. However, the expert estimates of these two rates vary by such immense factors that we simply cannot say whether the spiral, if it exists, is upward or downward. There is something severely wrong with the Himalaya but we cannot tell what it is. The traditional response – a call for more research – has not worked and the perceived urgency of the situation calls for action now, before it is too late. The challenge is to furnish a non-arbitrary strategic framework for the action.

Putting such a framework together calls for a new synthesis of hard and soft science. When, try as you may, you cannot find out what the facts in the Himalaya really are you can still do something. You can find out why it is that you can’t find out what they are. The authors begin by showing how it is the institutions and their contradictory problem definitions – the international agencies insisting that there are too many people; the people themselves insisting that there is not enough food – that continually muddle the hard scientists’ efforts to pinpoint what is really going on and why. In an important sense, they argue, the institutions are the facts.

Originally a professional soldier, MICHAEL THOMPSON studied anthropology (first degree and PhD at University College London, B.Litt at Oxford) while also following a career as a Himalayan mountaineer (Annapurna South Face 1970, Everest Southwest Face 1975). His early research on how something second-hand becomes an antique (Rubbish Theory, 1979, Oxford University Press) led to work on the ‘energy tribes’ (in various western think tanks), on risk, on Himalayan deforestation and sustainable development, on household product development (in Unilever), on global climate change, on technology and development, and on what might be called ‘the even newer institutionalism’ (e.g., Cultural Theory, co-authored with Richard Ellis and Aaron Wildvasky, 1990, West View).
He is a Fellow at the James Martin Institute for Science and Civilization, University of Oxford, an Institute Scholar at the International Institute for Applied Systems Analysis, Laxenburg, Austria, and a Senior Researcher at the Stein Rokkan Centre for Social Research, University of Bergen, Norway.

The challenging mountains – Makali in particular – lured MICHAEL WARBURTON (in his saner moments a University of California at Berkeley-trained natural resource economist and lawyer) to the Himalaya; the people he met there taught him that ‘development’ will have to change if it is ever to be seen as ‘help’. He worked at the International Institute for Applied Systems Analysis during the early 1980s and is now Executive Director of the Public Trust Alliance, a San Francisco-based organisation which serves as a watchdog for public trust resources.
His recent article – ‘Towards Greater Certainty in Water Rights? Public Interests Require Inherent “Uncertainty” to Support Constitutional Governance of Our State’s Waters’ (McGeorge Law Review, 36, 2005) – builds on the idea that scientific and legal uncertainty are actually valuable institutional resources for supporting responsible public action in the face of changing circumstances.

TOM HATLEY is a Sequoyah Distinguished Professor in Cherokee Studies at Western Carolina University, where he teaches and directs programmes in the areas of conflict resolution, Native American history, and cultural and environmental issues. He studied forestry (at Yale) and history (at Duke) and, after a spell as a participant in the Young Scientists Summer Programme at the International Institute for Applied Systems Analysis in Austria, became the first Stewardship Director of the Nature Conservancy in North Carolina. Subsequently, as Director of the six-state Southern Appalachian Forest Coalition, he has been influential in the passage of the Clinton Administration’s roadless areas protection rule for the US’s national forests, and has had a hand in the collaborative settlements of the New York City watershed dispute. Author of The Dividing Paths – a history of the Cherokees and their neighbours in the Revolutionary era – he works closely with the present-day Cherokee people in Oklahoma and North Carolina.

DIPAK GYAWALI has been involved with the water and energy sector in Nepal since the late 70s, initially as a government engineer and more recently as an independent analyst. Trained, with typical Nepali even-handedness, in both the Soviet Union (water engineering at Moscow Energy Institute) and the United States (resource economics at the University of California at Berkeley) his research agenda focuses on the interface between technology and society, mainly around issues of energy and water. He has written extensively on natural resource management, technology and societal change, a recent synthesis being Rivers, Technology and Society: Learning the Lessons of Water Management in Nepal (published jointly, 2003, by Zed Books, London and Himal Books, Kathmandu).
He works as a director of the Nepal Water Conservation Foundation, is a Pragya of the Nepal Academy of Science and Technology, and a member of the board of Oxford University’s James Martin Institute for Science and Civilization. He also served briefly as Nepal’s water resources minister in 2002-3.

Be the first to review “Uncertainty: On a Himalayan Scale” Cancel reply