Temples of the Nepal Vallery 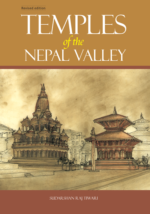 Temples of the Nepal Vallery

Temples are dominant in the ensemble of Nepali traditional architecture. Actually, the image and visual appeal of Nepali architecture and the skyline of the Kathmandu valley is registered most by the multi-roofed temples. A significant number of the temples follow Vastushastra, the classical Hindu ritual design principles as handed down from ancient times through oral tradition. A philosophically and ritually different group of temples, the Dyochhen also line the streets, literally merging with the style of the streetside residential architecture. For the first time, the writer presents a thoroughly researched account of the origins, development and detailing of temples of Nepal from the ancient Kirat period to the times of the Shah, showing how and why the Nepali temple came to be so different from the Nagara and Dravida styles popular in India and formed the Varata style and design mentioned in Vastushastra.

The book is presented in three sections: the first deals with the background to the uniqueness of the Nepali temple, the second discusses the towns and the site of the temples, and the last with the development of temple architecture in various historical periods. The tiered temple has been most elaborated in terms of their rituals and symbolism, design principles, materials and methods of construction.

Sudarshan Raj Tiwari, born in Bishalnagar in Kathmandu in June 1950, completed his schooling in Kathmandu passing his School Leaving Certificate examination from Juddhodaya Public High School in first division with eighth position on the board in 1966. He was tutored in freehand sketching by the noted traditionalist artist Chandraman Maskey. He completed intermediate studies in sciences from Amrit Science College and passed at the top of Tribhuvan University list in 1968. He studied architecture and earned Bachelor’s degree from School of Planning and Architecture, New Delhi (University of Delhi) in 1973 with first class and gold medal. He took his Master’s degree in Architecture from University of Hawaii, USA in 1977 specializing on housing in tropical countries. His interest drew him to the study of Nepali historical architecture, urbanism and culture, which led to a PhD from Tribhuvan University for his dissertation on ancient settlements of Kathmandu valley.

He has served in the faculty of Tribhuvan University’s Institute of Engineering for almost forty years, and was Dean of the Institute of Engineering between 1988 and 1992. Prof Tiwari has worked at several world heritage sites such as Lumbini, Swoyambhu, Changunarayan and Bhaktapur Durbar Square. He has also consulted on infrastructure for health and education sector projects of World Bank in Nepal and Afghanistan.

Although he had retired from active teaching and consultancies in 2013, the massive damage suffered by the traditional heritage buildings in the 2015 Gorkha earthquake and the campaign of rebuilding mounted in response drew him back in to participate in the process of reconstructive conservation of temples. His engagements in the projects Kashthamandap (2021) and Ranipokhari (2020) have earned him public appreciation.

His previous publications include Tiered Temples of Nepal (1988), The Ancient Settlements of the Kathmandu Valley (2001) and The Brick and the Bull (2002).