The Oriental Casebook of Sherlock Holmes 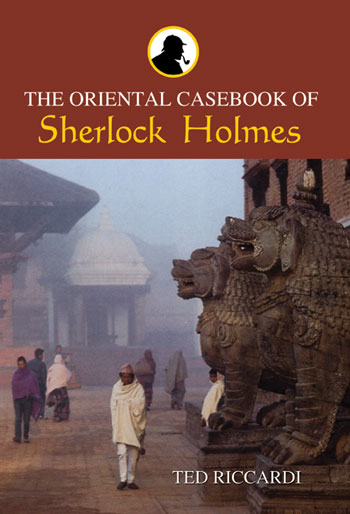 The Oriental Casebook of Sherlock Holmes

SthannamkoshClose Encounters: Stories from the Frontline of Human Rights Work in Nepal

Sherlock Holmes is dead—or so most of the world
thinks. His fatal plunge over the Reichenbach
Falls as he struggled
with his archenemy, Moriarty, has been widely reported.

But Holmes escaped and is alive.

In his immediate circle, only Holmes’s brother,
the lethargic genius Mycroft, knows of his survival. Even Dr Watson thinks that
the great detective is dead. Among his enemies, Sebastian Moran, Moriarty’s
chief henchman, knows of Holmes’s probable escape and waits for their
inevitable meeting.

From 1891 to 1894, Holmes wanders through Asia. He is alone, without Watson, without Scotland Yard,
armed only with his physical strength and endurance and his revered cold logic
and rationality.

The adventures recounted in The Oriental Casebook of Sherlock Holmes range from Lhasa to Katmandu, from the
East Indies to the deserts of Rajasthan. In Tibet and
throughout the Orient, Homes is caught up in the diplomatic machinations of
British imperialism that Rudyard Kipling dubbed ‘the Great Game’. He confronts
the tsarist agent Dorjiloff, the great art thief Anton Furer, and the
mysterious Captain Fantôme. And here, written in Holmes’s own words, is the
account of ‘The Giant Rat of Sumatra’, for which until now he so famously
thought the world unprepared.

Ted Riccardi
is Professor
Emeritus in the Department of Middle East and Asian Languages and Cultures, Columbia University, New
York. He began teaching at Columbia
in 1968 and served as chairman of his department and as director of Columbia’s Southern Asian Institute in the School of International and Public Affairs. Among
his special interests are the history and cultures of India and Nepal, where he has lived and
travelled widely and about which he has written extensively.

He has
received a number of research awards, including grants from the American
Council of Learned Societies and the Ford Foundation and Fulbright fellowships.
From 1980 to 1982 he served as Counsellor for Cultural Affairs in  the United States Embassy in New Delhi. In 1999, he
took early retirement from Columbia
to raise a new family and to write.

Riccardi lives in Kathmandu and New York City with his wife, Ellen Coon, and
their family. They spend as much time as they can in New Mexico. The Oriental Casebook of
Sherlock Home is Ted Riccardi’s first work of fiction, a tribute to his
favourite mystery writer, Sir Arthur Conan Doyle.