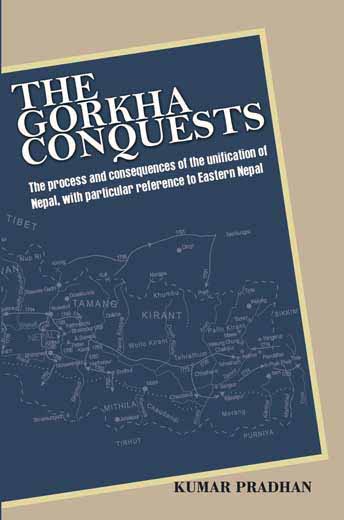 The Gorkha Conquests: The process and consequences of the unification of Nepal, with particular reference to Eastern Nepal

with a new introduction by John Whelpton

Nepal was forged out of the conquests by
the principality of Gorkha, and Nepalese historians often view this process as
consisting of ‘national unification’. This work is a probe to see whether
cohesive elements of nation-building were present in the past to warrant such a
description. It examines some of the real motives behind Gorkha’s desire to
expand over the neighbouring hills and plains and beyond, together with its consequences
on the society and economy of the peoples of great diversity living in those
areas.

Eastern Nepal, also called Kirat, was one of the
last areas to be conquered by Gorkha, but has received somewhat scant attention
from Nepalese historians. This book provides a region-specific coverage to
allow for a deeper understanding of the process of Nepal’s political unification, and
its impact.

The publication of Kumar Pradhan’s The Gorkha Conquests in India in 1991 marked an important milestone in Nepalese historiography because it was a direct challenge to a ‘nationalist’ orthodoxy presenting the military campaigns of King Prithvi Narayan Shah of Gorkha and his immediate successors as an heroic venture on behalf of all the people of Nepal…The environment in which this book is now being republished is radically different from that in which it originally appeared since Nepal is now no longer a kingdom and an emphasis on ethnicity, regarded as almost taboo before 1990, has now moved to the centre of the Nepalese political arena…In these new circumstances, it is possible that a negative evaluation of Prithvi Narayan himself will become the new orthodoxy…The debate will in any case continue and The Gorkha Conquests will remain an early but very important contribution to it.

Kumar Pradhan received his PhD in history from Calcutta University.
He served on the Department of History, Darjeeling
Government College,
from 1966 to 1984, when he took over as the principal of Kurseong College,
Kurseong.

His work Pahilo
Pahar (1982) was awarded the Bhanubhakta Puraskar for 1983 by the Nepali Academy
instituted by the Government of West Bengal. In 2002, he received the Nepali
Sahitya Sammelan Puraskar awarded by the Nepali Sahitya Sammelan, and, in 2003,
the Agam Smriti Puraskar, an award given every three years for contributions to
the Nepali language and literature by the Sikkim Sahitya Parishad.

Since 1993, he has
been the editor of the Nepali-language daily Sunchari Samachar,
published out of Siliguri, West Bengal, India.

John Whelpton first came to Nepal
in 1972 to work as a VSO lecturer in English with Thakur Ram Campus, Birgunj,
and Amrit Science Campus, Kathmandu. He later
became a student of Nepalese history at the School
of Oriental and African Studies, University of London. Since obtaining his doctorate in
1987, he has been teaching English, and recently also Latin, in Hong Kong.

He
returns regularly to Nepal
and continues research on history and politics. His Nepal-related publications
include Jang Bahadur in Europe (1983), Nepal (in the World
Bibliographical Series) (1990), Kings, Soldiers and Priests: Nepalese
Politics and the Rise of Jang Bahadur Rana (an edited version of his PhD
thesis) (1991), Nationalism and Ethnicity in Nepal (co-edited with David
Gellner and Joanna Pfaff-Czarnecka) (1997 and 2008), People, Politics and
Ideology (with Martin Hoftun and William Raeper) (1999) and A History of
Nepal (2005).

Be the first to review “The Gorkha Conquests” Cancel reply