View cart “The State and Society in Nepal: Historical foundations and contemporary trends” has been added to your cart. 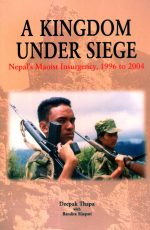